Understanding How Violet Light Can Stop Myopia Progression
Posted May 25, 2021 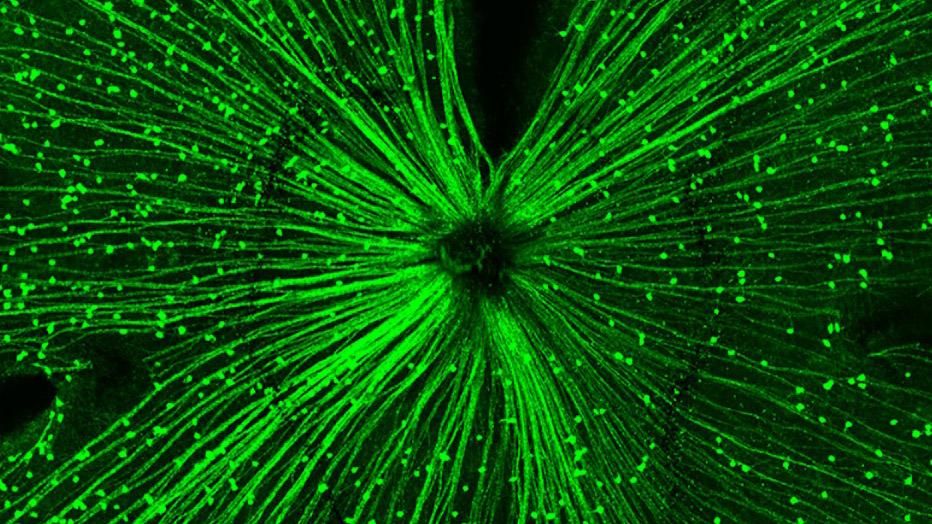 The expression pattern of the photoreceptor protein OPN5 in a mouse retina. The protein is sensitive to violet light and, as reported in a new study from a group of international researchers, plays an important role in the ability of violet light to stop the progression of myopia. This violet light effect has been previously reported, but now researchers are beginning to understand how it works. The prevalence of myopia has been growing worldwide, and it is especially common in Asian countries.

An international team of researchers has taken an important step toward understanding a powerful potential treatment for myopia, which is fast becoming a public health crisis in Asia.

Previous work found that violet light can stop the progression of myopia, an elongation of the eye between the cornea and the retina that results in nearsightedness where far-away objects appear blurry. Now researchers at Keio University in Japan, Cincinnati Children’s Hospital Medical Center, the Georgia Institute of Technology, and Emory University have discovered that the protective effects of violet light depend on a newly discovered photoreceptor protein in the eye called OPN5, or neuropsin, which was known to be sensitive to violet light.

“Among all the light that reaches our eyes, we have known for sure that violet light is special,” says Toshihide Kurihara, M.D., Ph.D., assistant professor at Keio University in Japan. “The human eye seems to use it as a clue to control its size, whereas we knew neither the mechanism nor the necessity behind this phenomenon. We believe to elucidate this mystery might be the key to stop myopia pandemic and worked on it for years.”

A few years ago, the Keio team reported that violet light could prevent myopia progression. Violet light is abundant in outdoor sunlight but largely absent indoors, where it’s not emitted by artificial lights and ultraviolet protective coatings on windows also filter out violet light wavelengths.

In a paper published online May 24 in the Proceedings of the National Academy of Sciences, the research team explained the molecular mechanism behind this violet light effect on myopia progression and presented a new function of the OPN5 protein. OPN5 is part of a group of photoreceptor proteins called opsins found in the membranes of cells that are not involved in forming visual images but that play other important roles in the eye. 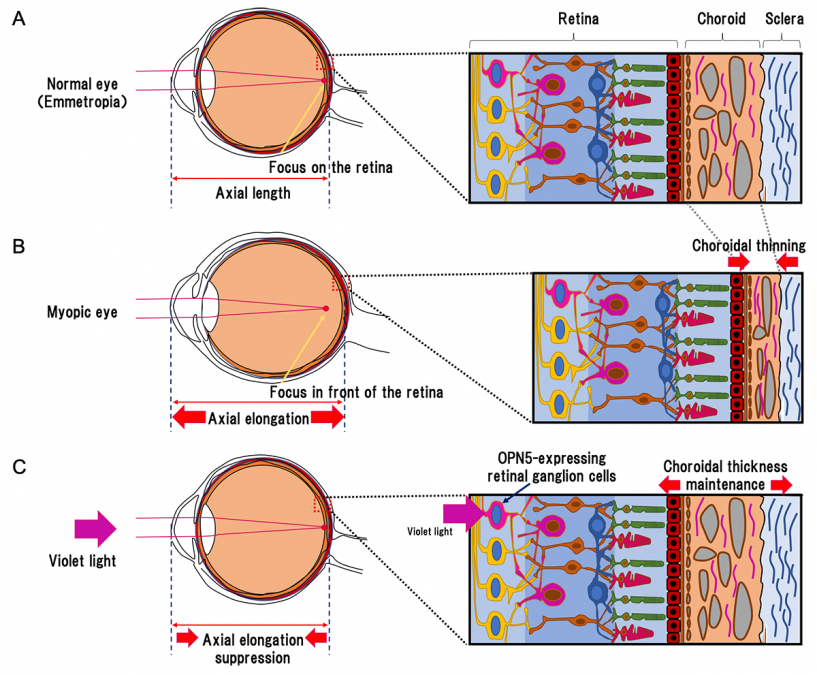 A diagram illustrating how violet light interacts with the photoreceptor protein OPN5 to prevent progression of myopia. At top, A, a normal eye. In the middle, B, shows a myopic eye with characteristic elongation between the cornea and the retina and a thinning of the vascular layer called the choroid. The bottom, C, shows that violet suppresses the elongation and thinning of the choroid. (Illustration: Toshihide Kurihara)

The researchers used an established mouse model of myopia to demonstrate that without OPN5, violet light did nothing to halt elongation of the eye. Mice without the OPN5 protein also saw continued thinning of the choroid, a vascular layer that decreases in thickness in myopic eyes.

At Cincinnati Children’s, Richard Lang, Ph.D., has played a key role in detailing unexpected roles that opsins play in the skin and the brain in addition to the eye. Some of his previous work has shown that Opsin 5  could regulate dopamine levels in the eye.

Because dopamine has a role in myopia development, he says, “it then became obvious that Opsin 5 was likely to be the light sensor that explained the observations of the Keio group — that violet light could suppress myopia. When we approached Machelle Pardue, Toshi Kurihara, and Kazuo Tsubota, they were keen to assess this question. My group has been delighted to take part in this collaboration.”

Understanding how violet light protects against worsening myopia is key as the condition’s prevalence accelerates. Already, roughly a third of people around the world are myopic, and some projections suggest nearly 5 billion people will have the condition by 2050. Nearsightedness typically begins in school-age children, and it’s often not considered a significant problem since it can be corrected with glasses. Yet, in China, myopia is the second-leading cause of blindness.

Slowing or stopping the changes in the eye that lead to myopia will limit the number of people who develop what’s called high myopia—elongation so severe that it can lead to detached retinas, glaucoma, and other problems that cause vision loss. A 2016 study in the journal Ophthalmology predicted nearly 10% of the world’s population will have high myopia by 2050.

“This study really does point to the fact that violet light is protective, and now there's a mechanism, this OPN5, that may underlie that,” says Machelle Pardue, Ph.D., professor in the Wallace H. Coulter Department of Biomedical Engineering at Georgia Tech and Emory and a co-author of the study. “Next is to understand how you could use violet light to be protective in the human population. There are still some mechanistic aspects that need to be investigated to really understand how OPN5 may be doing this. This process is complex — if OPN5 is detecting violet light, it still has to have some sort of signaling molecule that's telling the eye to grow excessively.”

The time of day of any potential violet-light therapy for myopia also could matter. The researchers exposed mice to the light at different times of day, and their data showed treatment in the evening hours seemed to be most effective.

This research was supported by the Japanese Ministry of Education, Culture, Sports, Science and Technology (grant No. 18K09424); the Tsubota Laboratory, Inc.; the United States National Eye Institute (grant Nos. EY016435, EY027077, EY027711; the U.S. Department of Veterans Affairs (grant No. IK6 RX003134; and the Emma and Irving Goldman Scholar Endowed Chair at Cincinnati Children’s Hospital Medical Center. Any opinions, findings, and conclusions or recommendations expressed in this material are those of the authors and do not necessarily reflect the views of any funding agency.