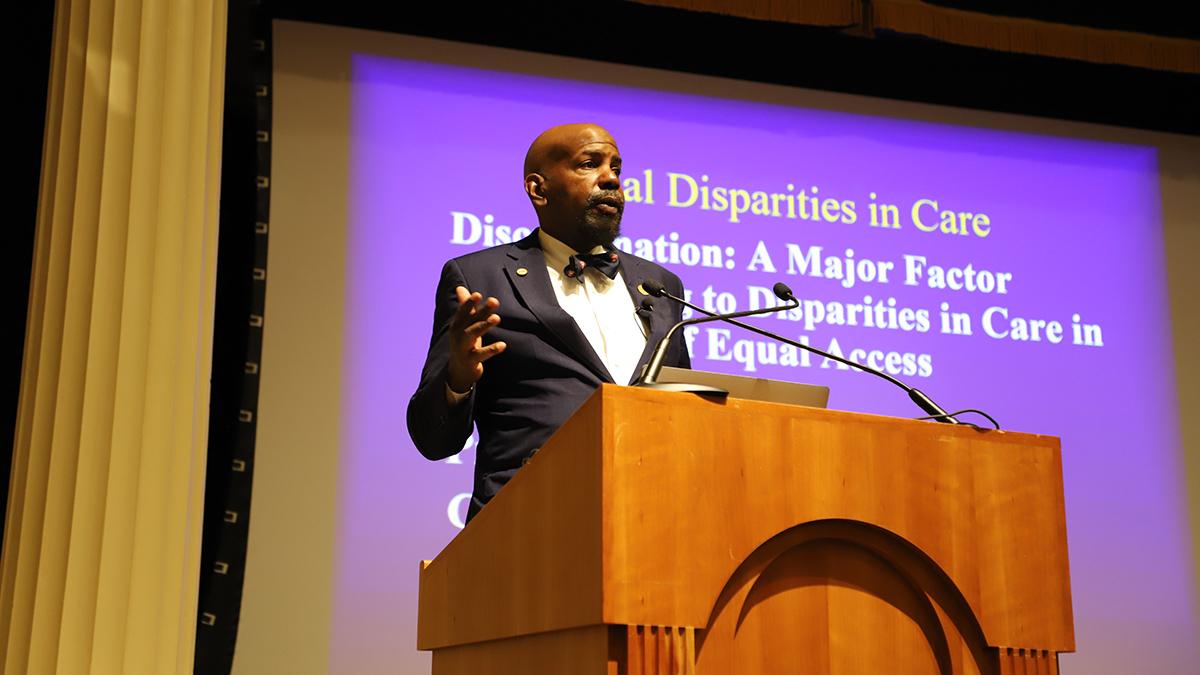 For the past two years, Black people in the U.S. have been stuck at the intersection of two pandemics: coronavirus and systemic racism. One of them, evident long before the other, continues to rage unchecked by any mask or needle.

That was the foundation laid out by researchers and invited guests at the Symposium on Health Disparities & Academy of Medicine Distinguished Lecture hosted April 18 by the Wallace H. Coulter Department of Biomedical Engineering at Georgia Tech and Emory University. The day-long event explored the baseline issues and how the biomedical engineering community can work to address those disparities.

“Black people suffer from a number of different issues and problems. One is the concept of ‘breathing while Black,’” Distinguished Lecturer Cato Laurencin told an audience of students and researchers gathered at Georgia Tech’s Historic Academy of Medicine. “’Breathing while Black’ is the concept of wear and tear that takes place just from being a Black person living in America. Trying to do your thing and losing ground in America has also been called the allostatic load.”

This allostatic load is the cumulative burden of exposure to repeated or chronic stress from stigma, discrimination, and racism — physiological consequences that have real impact on health. Laurencin pointed to studies that found racial discrimination and consciousness of racial stigma are associated with higher blood pressure, for example, and that allostatic load at least partially accounts for the higher mortality among Black people, independent of socioeconomic status or health.

“It really underscores the physiological stressors that take place — the things that come at you on a daily basis as a Black person, and how they affect you in the long term,” said Laurencin, an engineer, physician, scientist, and innovator who is University Professor at the University of Connecticut.

Allostatic load was one of the many topics that came up during a full day of conversations focused on racial disparities in healthcare and research, including two lectures and a panel discussion as well as updates on four early-stage projects in the Coulter Department aimed at creating new tools for studying diseases that disproportionately affect Black people. 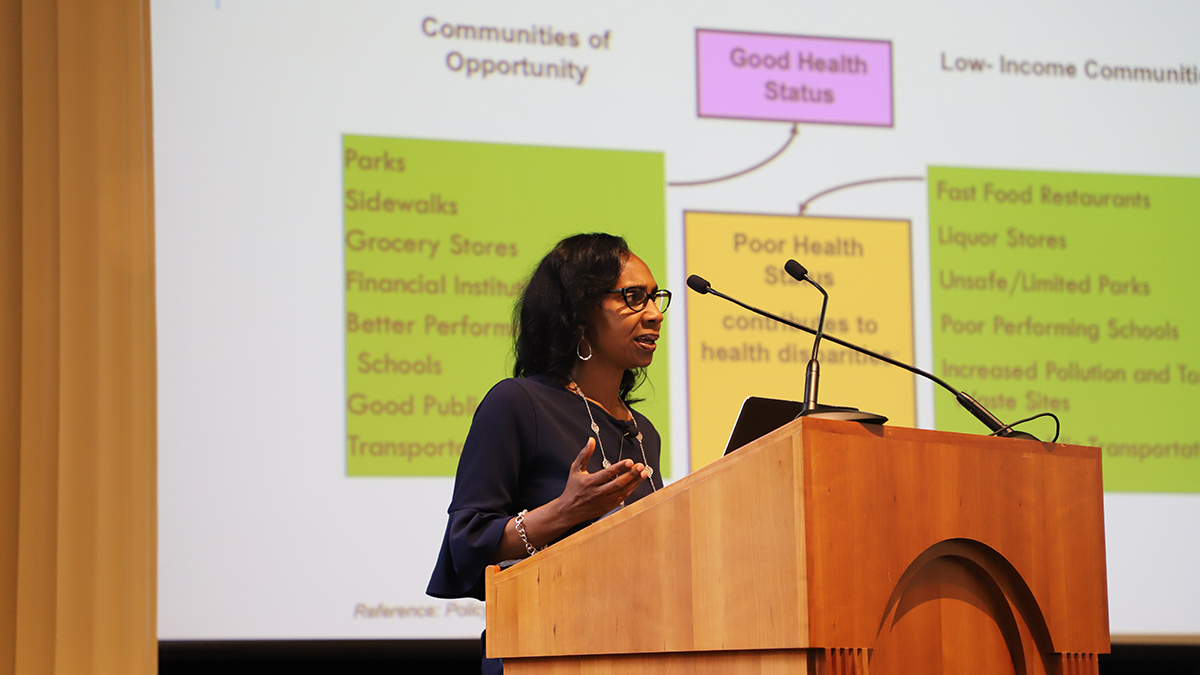 Diversity, equity, and inclusion are very important to our Department,” said Machelle Pardue, interim Wallace H. Coulter Department Chair. “We work daily to incorporate these principles into the various aspects of Coulter BME and our education, in teaching our undergraduate and graduate students, and, of course, in our research.”

The Department redoubled efforts to address structural racism in the wake of the murders of George Floyd, Ahmaud Arbery, Rayshard Brooks, and others. Those killings, and targeted attacks on Asian Americans, prompted conversations about ways the Department could help lead change on our campuses and in the broader academic and scientific world.

“This symposium is part of our answer to what comes after the protests,” said Associate Professor Ed Botchwey, who organized the symposium with fellow Coulter BME faculty member Johnna Temenoff.

Na’Taki Osborne Jelks, associate professor of environmental and health sciences at Spelman College and a former Georgia Tech and Emory student, set the tone for the day with the opening Symposium Lecture.

She talked about the effects of place and the staggering impact that implicit bias can have on the health and healthcare of Black people, particularly Black women: She noted the maternal mortality rate for Black women increased nearly 20 percent just from 2018 to 2020.

“What’s behind this? I can’t really answer that, because there are a number of factors,” Osborne Jelks said. “We can look at implicit bias. There is considerable empirical evidence that even well-intentioned whites who are not overtly biased and do not believe that they have prejudice typically demonstrate unconscious, implicit negative racial attitudes and stereotypes when serving Black patients.”

Osborne Jelks drew on personal experience to introduce the role of place in the health of Black people. Her mother was diagnosed with breast cancer after living in proximity to Louisiana’s infamous industrial “Cancer Alley.”

She also discussed how living conditions and residential segregation can influence a person’s “biological weathering” — the physiological ramifications of dealing with stress and discrimination. It’s a sociological concept that brushes up against the allostatic load model Laurencin would explore later.

In his distinguished lecture, Laurencin also dug into the biases that seem to be hardwired into the biomedical research enterprise, pointing to National Institutes of Health funding as a prime example. He cited work from more than a decade ago that found the success rate for white applicants for NIH research grants was 1.7 times higher than Black applicants.

The day ended with a panel of scholars exploring more of the topics Laurencin and Osborne Jelks covered and fielding questions from the audience. The panel included Coulter BME Assistant Professor Karmella Haynes; Sheryl Heron, Emory professor, physician, and vice chair of faculty equity, engagement and empowerment; and Elizabeth Ofili, director and senior associate dean of the Clinical Research Center at the Morehouse School of Medicine.

All of them shared experiences of what it is like to not only be Black but also a woman, and they discussed the responsibility they carry for the next generation of scholars and physicians.

“I tell the residents that I know, ‘You will struggle, but you can and will do this, and I will help you and guide you.’ I want them to have a seat at the table of leadership and engagement,” Heron said. “That part is not negotiable. They have to be there.”

Laurencin said the concept of diversity, equity, and inclusion has to expand for biomedical engineers — and society writ large — to make progress: No more DEI; instead, IDEAL. He said that’s the foundation for a new course at the University of Connecticut focused on a more-active anti-racism, and it’s a concept the Regenerative Engineering Society has adopted to build toward “the democratization of science.”

“Practicing anti-racism is the future,” Laurencin said. “Let’s move from diversity, inclusion, and equity, or ‘DIE,’ to inclusion, diversity, equity, anti-racism, and also learning, or ‘IDEAL.’ A difficult path? Yes. But you never know how strong you are until being strong is your only choice.” 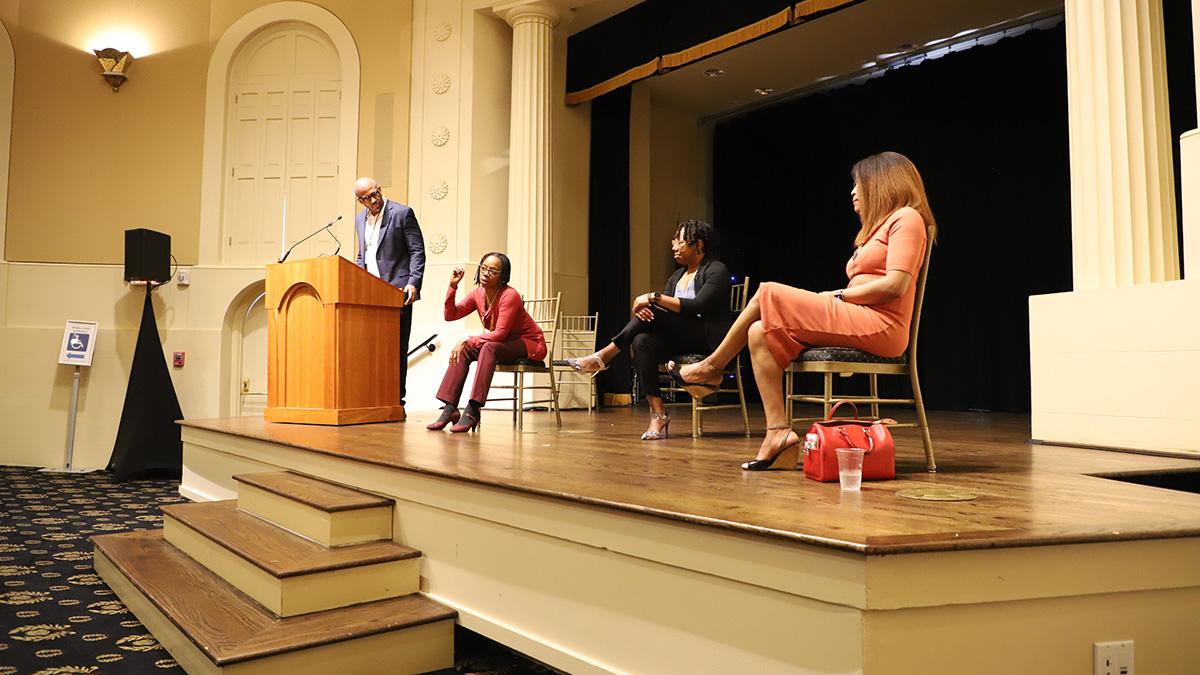