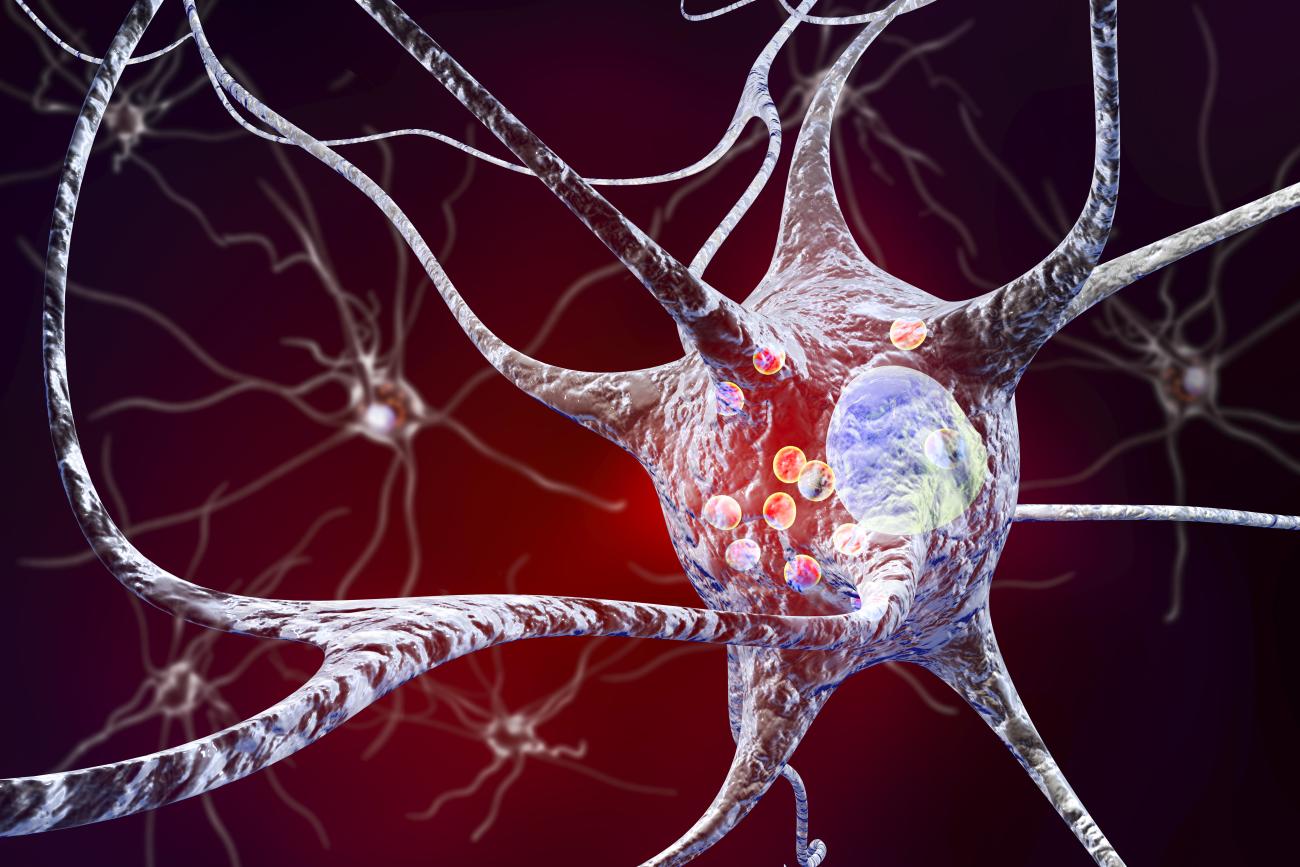 This 3D illustration shows neurons containing Lewy bodies (small red spheres), which are deposits of proteins accumulated in brain cells that cause their progressive degeneration, part of the devastating toll Parkinson's takes on a person. The Blue Sky awards are designed to support innovative, technology-driven approaches to addressing this disease.

The latest round of “Blue Sky” seed grants from the McCamish Parkinson’s Disease Innovation Program will once again support research teams at Georgia Tech and Emory University taking a technology-driven approach to probe the devastating brain disorder. But this year, they’re breaking with tradition.

“We’re starting to see more proposed projects from teams who have not traditionally worked in Parkinson’s disease,” said Garrett Stanley, professor and founding director of the McCamish program in the Wallace H. Coulter Department of Biomedical Engineering at Georgia Tech and Emory.

“This is one of the goals of the McCamish Program, to help scientists and engineers who have worked in other areas bring their ideas and talent to understanding, treating, and one day curing Parkinson’s disease,” Stanley added.

A team led by Coulter BME Associate Professor Charlie Kemp is using a $125,000 award to combine the concepts of fun and utility. They’re developing a therapeutic robotic game system to increase and enhance the patient exercise experience, while reducing the demands on therapists. The goal is a future where people with Parkinson’s disease can play therapeutic games at home with interactive robots, giving therapists more time to provide individualized guidance.

Robotics researcher Yue Chen has a completely different aim in mind. He’s leading a team of engineers, scientists, and clinicians in developing, “a safer and more accurate approach for deep brain stimulation electrode placement during Parkinson’s disease treatment,” he said. Chen is an assistant professor in the Coulter Department, and his team received one of the larger grants.

“The Blue Sky grant will allow us to develop collaborations with the surgeons, identify the critical gap, and collect the preliminary data for future external grant applications,” Chen said.

Emory’s Amanda Gillespie, director of Speech Pathology of the Emory Voice Center, is leading a team using its $125,000 grant to design the Speech-Assisting Multi-Microphone System (SAMMS), wearable technology that can isolate, monitor, and analyze vocal loudness and provide biofeedback to the wearer when minimum loudness targets aren’t met.

This is a continuation of a Blue Sky project that began with the first round of seed grants, last year. “We aim to make further improvements to the technology based on our pilot study feedback and evaluate the device over a prolonged period of use with patients, testing the hypothesis that using the device improves vocal loudness in conversation over time,” Gillespie said.

And Michael Borich, who runs the Neural Plasticity Research Lab at Emory, is leading a team leveraging its $40,000 award to begin preliminary work on improving mobility and reducing falls in Parkinson’s patients.

The Blue Sky seed grant program, made possible by a gift from the McCamish Foundation, launched last year to identify and support engineers and scientists at Georgia Tech and Emory who can bring innovative approaches to Parkinson’s research.

“We are building a community of researchers across Georgia Tech and Emory that expands on what was already a strong effort in the Atlanta area,” Stanley said. “In future years, our goal will be to work towards narrowing the scope to focus on a coordinated effort across multiple teams, which is really unique and exciting.”