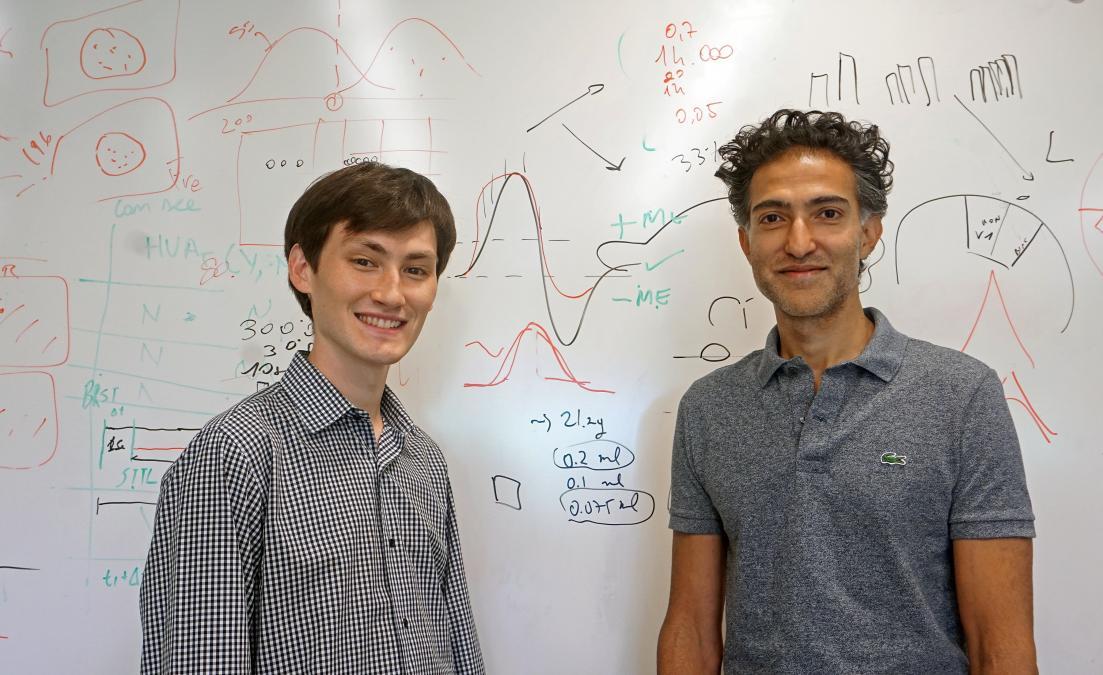 Brice Williams and Bilal Haider have demonstrated that the mouse may not be quite as blind as scientists, or songwriters, previously thought.

Some neurons in the visual system act like Instagram photo filters, dialing up the darks and fading the whites at the center of our vision. It’s a well-known, fundamental process in the brains of humans and primates. Turns out it works that way in mice, too, researchers at the Georgia Institute of Technology and Emory University have now discovered.

That’s important, because it means the mouse is a better model for studying human visual functions and diseases than scientists previously thought, according to Bilal Haider, lead author of an international study published recently in the journal Current Biology.

“This is surprising, because no one thought it would be the same in mice. Their eyes don’t face forward, and they don’t move their eyes to focus on objects,” said Haider, assistant professor in the Wallace H. Coulter Department of Biomedical Engineering at Georgia Tech and Emory. “But we discovered this fundamental feature of vision extends to the mouse visual system and can help us better understand the human visual system, [eye] diseases, and so forth.”

Primates and mice have both monocular vision and binocular vision, but those terms mean different things for each. Monocular vision in a human or a primate is when just one eye is used. But in a mouse, the eyes are on opposite sides of the head, and each eye views a large and non-overlapping region of the visual field, which can be helpful in spotting potential predators.

However, humans, monkeys, and mice also have binocular vision — where the two eyes have overlapping fields of view, allowing for better perception of depth and other visual features. While humans have a 135-degree binocular field of vision in front of them, mice are operating at only 40 degrees of binocular vision. Apparently, they make the most of it.

Haider and his collaborators measured brain signals in mice looking at different visual stimuli. Measurements were made at multiple scales, one of the unique features of the research, according to Haider.

“From thousands, if not tens of thousands, of neurons, to small groups of neurons — like 10 to 50 at a time — and then single neurons,” he said. “We were able to measure the electrical activity flowing into a single neuron in the awake brain.”

At every level, he said, the researchers found the same thing when it came to responses to stimuli that were directly in front of the mouse: the response to the dark stimuli was much stronger than to the bright stimuli. Pretty much the same as it is in humans and primates.

“If you wanted to use a mouse for a model for curing blindness, visual dysfunctions, retinal damage, or other eye issues — it’s a huge field — it would be great if you knew their binocular vision was similar to ours,” said Haider, who also a researcher in the Petit Institute for Bioengineering and Bioscience. “That was a driving force behind this research.”

The discovery that mice and people see things at the center of their vision in a similar way was a bona fide “aha” moment for Haider. He asked the paper’s lead author, Brice Williams, who was analyzing the data they’d gathered, to look first at the brightest and darkest stimuli.

“We always present a range of blacks to grays to whites, but I suggested we separate the pure blacks and whites as a first pass, assuming the responses would be equal regardless of where the stimulus appeared,” Haider said, “because why in the world would they be different?”

Williams, who had been an undergraduate in the Haider lab and is now in the Emory/Georgia Tech M.D./Ph.D. program, showed the vastly different mouse brain responses to black and white, “and we thought that was interesting and weird,” Haider said. Then he reached out to a former collaborator in the U.K., associate professor Aman Saleem at University College London.

Saleem and his team in London had been working along similar lines, studying mouse visual responses, building a completely independent set of data. Haider wanted to take a look at it.

“Different continent, different everything, and we saw the same thing,” Haider said. “There was a significant increase in neural response to the dark stimuli in front of the mouse, and it makes sense. It could be because the natural world has dark objects, which are really salient: they can be shadows of something moving or approaching.”

While the neural reaction of mice on either side of the Atlantic showed sharp contrasts between dark and light stimuli at the center of vision, neural responses to peripheral imagery, whether it was light or dark, were pretty equal. There was definitely an increase in neural response relative to a blank screen, according to Haider, but it was equal between dark and light stimuli.

“What it shows us is, there’s an evolutionary advantage for the nervous system in mammals to do vision in this way,” Haider said. “There are probably behavioral advantages for processing visual stimuli in a different way when something is right in front of you versus off to the side. And the fact that it’s kind of the same in mice and humans makes the mouse a much more relevant model for studying vision and visual dysfunctions throughout the visual field.”

This research was supported by the National Institutes of Health’s National Institute of Neurological Disorders and Stroke (NS107968 to B.H.), National Institutes of Health BRAIN Initiative (NS109978 to B.H.), the Simons Foundation (SFARI 600343), Sir Henry Dale Fellowship from the Wellcome Trust and Royal Society (200501), and Human Science Frontiers Program grant (RGY0076/2018 to A.B.S.). Any opinions, findings, and conclusions or recommendations expressed in this material are those of the authors and do not necessarily reflect the views of any funding agency.