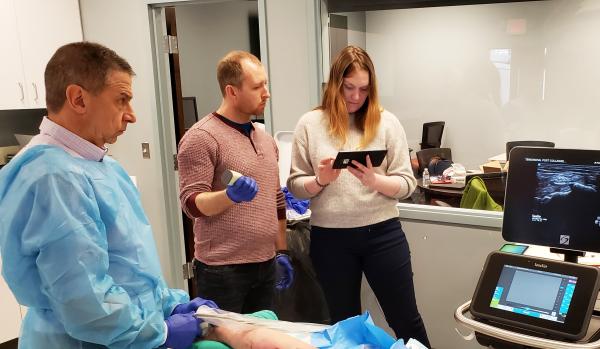 The Ocelot™ system being tested by Dr. Gerard Malanga, founding member of the TendoNova Medical Advisory Board. Also pictured two of the TendoNova co-founders, Jonathan Shaw and Shawna Khouri. 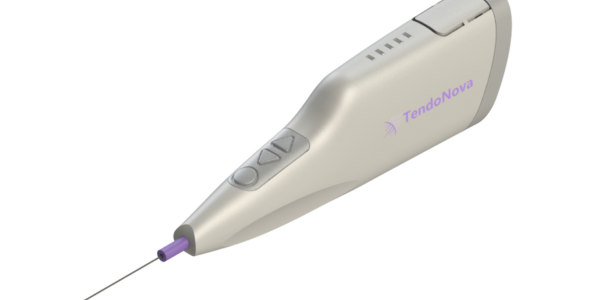 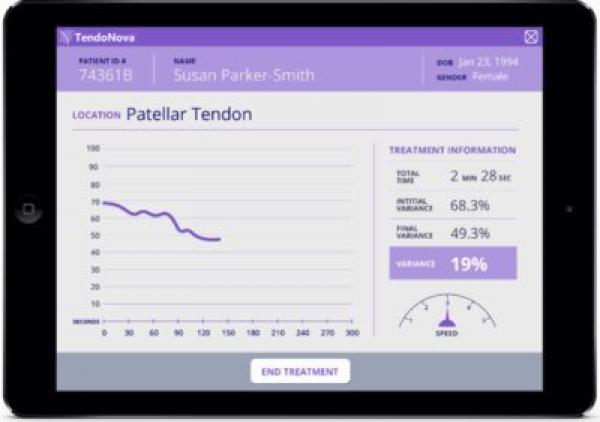 A startup business born in the Master of Biomedical Innovation and Development (MBID) program at the Georgia Institute of Technology recently secured some investment support from the National Football League Players Association (NFLPA).

TendoNova, an Atlanta-based company that develops medical devices that enable microinvasive orthopedic procedures, emerged from the intensive Master’s program within the Wallace H. Coulter Department of Biomedical Engineering at Georgia Tech and Emory, and in 2019 was one of the finalists in the NFL’s 1st and Future Competition at Super Bowl LIII, held in Atlanta (Feb. 2019).

Now, a year later, the NFLPA has invested (through its for-profit subsidiary, NFL Players Inc.) in TendoNova, whose initial product, the Ocelot system, addresses chronic tendon pain, which is prevalent in both athletes and the population at large.

“This is fantastic validation of the need we’re addressing for the product we’re building,” says Shawna Khouri, co-founder of TendoNova and MBID grad, now managing director of Biolocity at Georgia Tech and Emory University. She was part of a four-student team that partnered with Emory physician and associate professor Ken Mautner to launch TendoNova in 2017.

According to the NFLPA, this kind of support exemplifies the organization’s, “commitment to the health and longevity of football athletes. The NFLPA has also sponsored Harvard University’s Football Players Health Study, from which TendoNova had previously received research support.”

Approximately 30 million people in the U.S. suffer from chronic tendon pain, according to the NFLPA. That’s a lot of tennis elbow, Achilles tendinosis, and patellar tendon pain, conditions that are common in the NFL and, if left untreated, can lead to career-ending injuries.

“Chronic tendon pain in my knees was just a normal part of life as a player at all levels of the game, from high school to the NFL,” explains former New Orleans Saints All-Pro tackle Jon Stinchcomb. “Through my entire career I never found a way to resolve it; it was something I just dealt with. And I was not alone.”

TendoNova combines decades of regenerative medicine knowledge with modern data analytics to enable in-office procedures to treat chronic tendon pain. The Ocelot system uses the growth of healthy tendon to replace painful lesions by performing a controlled mechanical debridement of pathologic tendon – a less invasive procedure than current methods, which are expensive and require a clinician to poke holes in a tendon with a needle. The options are limited.

But the Ocelot system is a smart tool, easy to use, cost effective, and provides real-time data that enhances the clinician’s skill, making treatment of chronic tendon pain more accessible and reliable, bringing a surgical level of care into the office or training-room.

“We believe investments in companies such as TendoNova are a crucial part of the NFLPA’s mission to improve the health, safety and well-being of players both on and off the field,” says Sean Sansiveri, who oversees the NFLPA’s health, safety and medical research initiatives, “TendoNova’s Ocelot System will help players from all levels of the game overcome nagging injuries so they don’t become lifelong problems.”

It all coincides with TendoNova’s intentions to disrupt the market with a suite of tools for microinvasive procedures performed during a visit with a doctor. The Ocelot system is in the final phase of development and funds provided by the NFLPA will enable TendoNova to reach market launch in 2021.

“Having the NFLPA as a strategic investor is a big deal,” says Khouri.