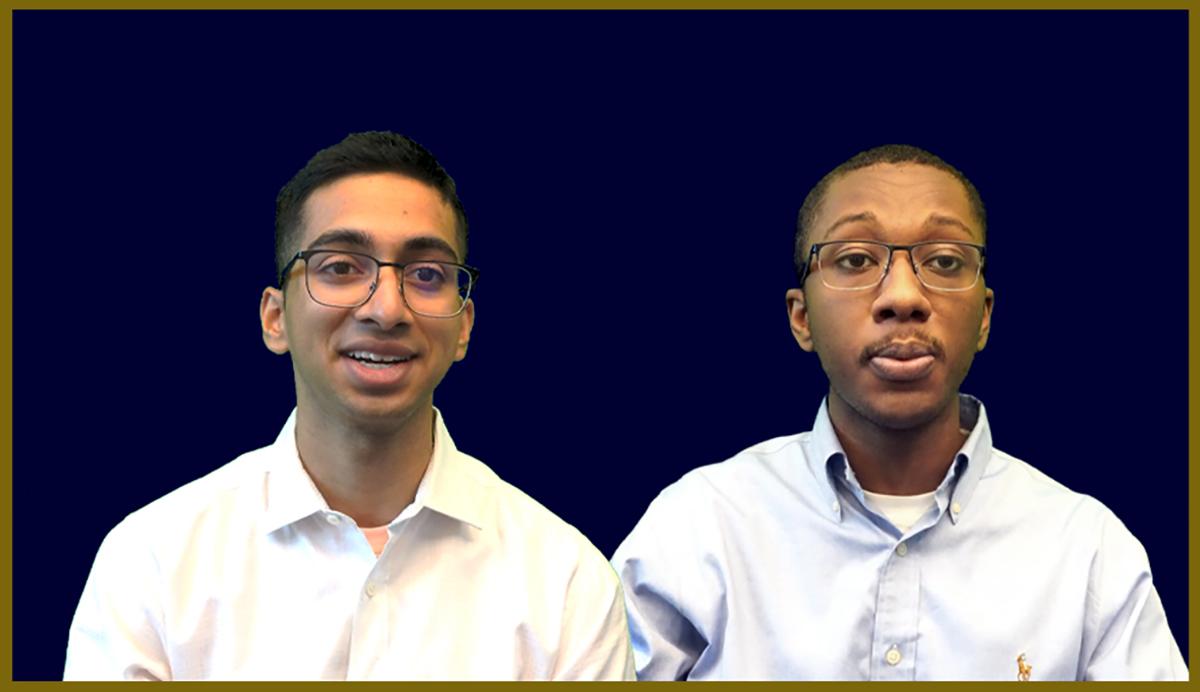 Rahul Tauro-Padival (left) and Timothy West, friends since high school, recently won the NSIN Reality Bytes Hackathon with their design of a cyber security system for the military.

Timothy West and Rahul Tauro-Padival bonded over their common interests and skillsets when they were students at Alpharetta High School, where they joined the high school robotics team and participated in other tech competitions.

When they both moved on to Georgia Tech to become engineers, they pursued very different academic paths – West in the Wallace H. Coulter Department of Biomedical Engineering at Georgia Tech and Emory University, Tauro-Padival in the Daniel Guggenheim School of Aerospace Engineering.

But recently they found a way to bring their talents and experience together to help the military defend against cybersecurity threats, and their work earned the students a winner’s share as one of the top four teams in the National Security Innovation Network (NISN) Reality Bytes: Visualizing Cyber Operations hackathon. NSIN’s hackathons bring problem solvers together over a short, intensive period of time to help solve military challenges.  For this competition, the teams worked with the Naval Information Warfare Systems Command (NAVWAR) on ways to use gaming technology to help visualize, monitor, and track cybersecurity operations. They plan to use their $10,000 award to advance their concept. Part of the award also includes access to NSIN resources and connections to help move their project forward.

“While the cybersecurity aspect did not have a lot of initial relation to our respective majors and areas of study, the fundamentals of concepts like coding and computers ended up having a lot to do with what we’ve learned throughout our education at Georgia Tech, and in the projects we’ve done in and outside of school,” said West, a rising senior in Coulter BME.

Perhaps more important than the students’ academic backgrounds was their familiarity and personal respect for each other. As Tauro-Padival explained it, he was studying for an exam on the top floor of the Clough Building and happened to see a poster advertising the competition. “After reviewing the hackathon’s mission statement and how Georgia Tech was a sponsor, I thought my old friend Timothy West would be the perfect partner to team up with,” he said.

The hackathon took about two weeks in May. The first round had the duo creating a Powerpoint pitch detailing their initial idea and its benefits. That got them into the second and final round, which involved turning the pitch into a 5-minute video. Their final presentation was delivered via Zoom, after which, each team went through a question and answer session with the panel of judges.

West and Tauro-Padival developed an augmented reality system called CyberVIEWS (for Visual Identification Electronic Warning system), which can warn operators about cyber threats. Using commercial gaming technology – the kind of virtual reality or augmented reality equipment you might find in a retail store – CyberVIEW detects cybersecurity threats by tagging devices with identifying marks that allow their condition to be viewed on maps or compatible graphic displays.

“CyberVIEWS greatest benefit would be to those warfighters operating without immediate access to their cybersecurity professionals,” noted Tauro-Padival, who is in his third year at Georgia Tech. “It enables personnel working away from larger support networks to visualize the targets and effects of an attack more efficiently and determines how they can prepare an immediate response.”

NSIN broke the Reality Bytes competition up into two tracks – startup companies and student teams – and the top four teams shared a $70,000 pot to help develop their concepts. The two startups, Cyberspatial and SeeSignal, won $25,000 each, with the student teams each winning $10,000 (a group of students from the University of Hawaii at Mānoa developed a virtual-reality solution to visualize satellite network capacity).

“Participating in the NSIN competition really improved our lives,” West said. “Especially in how it has brought attention to the unconventional perspectives that people in majors like ours can bring to various fields of technology. We expect the skills and connections that made help us as we move ahead into our future careers.”