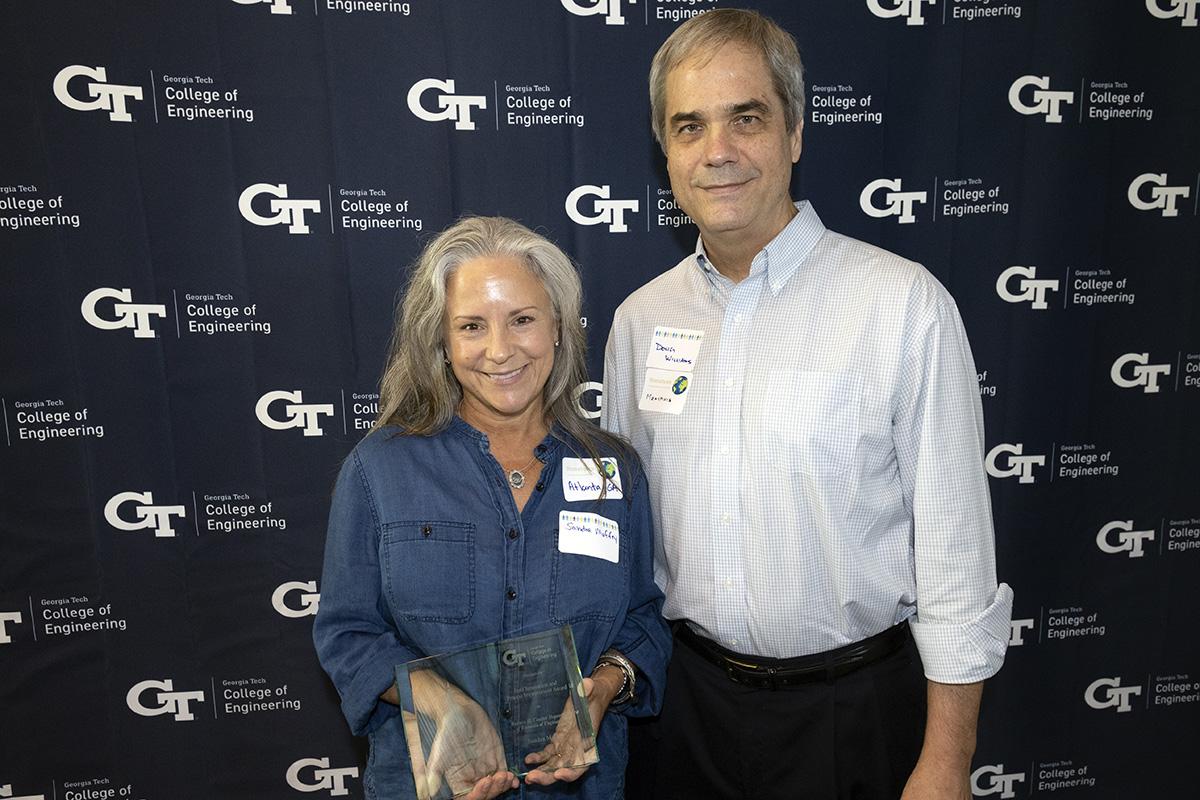 The Georgia Tech College of Engineering has honored two staff members in the Wallace H. Coulter Department of Biomedical Engineering for their critical roles supporting students, faculty, researchers, and other staff.

Professor Ross Ethier said Dinkins is “a lynchpin in managing Department finances” who solves problems creatively and alleviates the stress of managing his lab’s complex budgets across both campuses.

“She is an amazing problem solver, works tirelessly to get done what is needed, is scarily competent, and quite frankly, is my anchor of calmness in the complexity of grant financial management,” Ethier wrote in a letter supporting Dinkins’ nomination. “Remarkably, she does her very demanding job while maintaining the most positive attitude of anyone I have ever met at Georgia Tech.”

Dinkins was cited for deflecting credit to other members of her team and training virtually every member of the Department on financial procedures. And she was praised for working through complex negotiations to triple the number of Coulter BME students who can experience clinical settings without increasing costs to students or the Department.

Professor Machelle Pardue described Dinkins as an inspiration and a key contributor.

“She is an excellent mentor who maintains composure (and a sense of humor) in stressful situations,” wrote Pardue, who was interim department chair at the time of the nomination. “Her approach creates a strong team spirit where each member develops the confidence to do their job well.”

“Sandra has shown incredible effectiveness and helpfulness, stepping in to help all involved [in awards nominations],” wrote Coulter BME awards committee co-chair and Professor Eberhard Voit. “Moreover, she has consistently done it with a smile, good humor, and just the right amount of pushing and prodding to ensure things get done.”

Voit noted Maffey has documented the timeline and details for dozens of awards, keeping the process from becoming overwhelming and helping ensure robust nominations. He also said not even one nomination has been lost in the shuffle since Maffey took over administrative leadership of the awards committee, and he credited her diligence and focus for that success. Maffey developed a tracking system for internal and external awards across both institutions, including documenting successful and unsuccessful nominations to help the committee improve from year to year.

Former Department Chair Susan Margulies praised Maffey for using faculty annual reports to collect information about the key professional society and other awards faculty members were eligible for. Margulies said this served to boost the alignment between candidates and the most highly valued awards.

The College of Engineering’s annual staff awards are announced each year at the College-wide staff appreciation event.