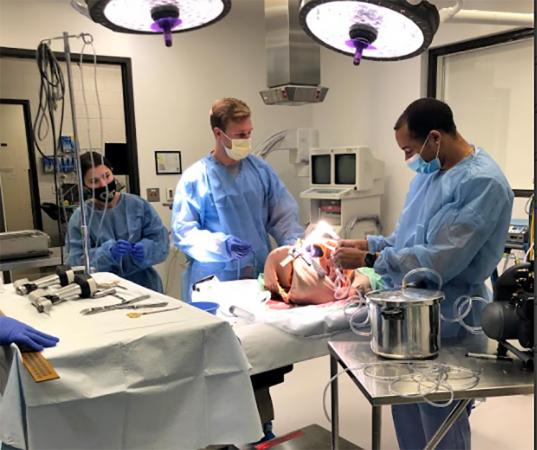 The Incredibles at work: (L-R) Caitlyn Nycum, Alexander (Zander) Prewitt, and Devin Jackson make good use of the operating room in T3 Labs. 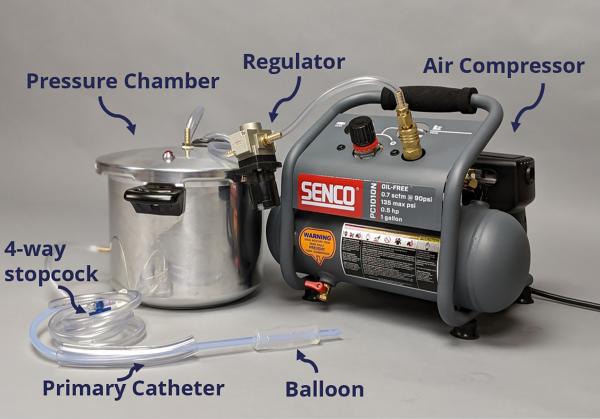 The Intrapericardial Cardiac Compression Device deploys a balloon-catheter system to deliver compressions directly to the heart during cardiac arrest, boosting blood flow to the brain.

By its nature, biomedical engineering is a multidisciplinary field, so it wasn’t a great stretch for a trio of undergrads from the Wallace H. Coulter Department of Biomedical Engineering at Georgia Tech and Emory University to compete, and win, in the Interdisciplinary Team category at the Fall 2020 Capstone Design Expo.

The whole process required more than the usual amount of careful planning and organization, given the twin challenges of social distancing during a global pandemic and developing a device for close-proximity procedures in an operating room.

“The biggest challenge was establishing trust and a sense of a collaboration amongst our team members, as there was somewhat of a divide between the in-person and virtual team members,” Tanzy said. “Four of us still met in-person each week, while taking the necessary precautions. We included [our other] team member virtually and were very intentional in the way we conducted our meetings to make sure he was included and still had a good experience.”

That experience focused on addressing the problem of cardiac arrest, a malfunction of the heart’s electrical system resulting in poor blood flow. Within minutes, it can cause brain damage. So the team worked with Dr. Zander Prewitt, an emergency room doctor at Emory, to develop the Intrapericardial Cardiac Compression Device. The device deploys a balloon-catheter system to deliver compressions directly to the heart during cardiac arrest, boosting blood flow to the brain, Nycum said.

The Incredibles have roots going back to 2017 when Tanzy and Nycum, when they were classmates in Problems in Biomedical Engineering. They ran into each other on campus about a year ago and decided they wanted to work with each other again, so Nycum got busy recruiting. She brought in Jackson and Coon, friends from her study abroad program, and Abbas, a classmate in the Coulter Department.

It wasn’t all a cakewalk. In addition to overcoming physical distance, there were some ideological gaps to bridge — some early disagreement among team members over the practicality and safety of what they were trying to design.

“Our passion for improving cardiac arrest outcomes and our mutual respect for one another motivated us to work through each issue as it came up,” Tanzy said. “If we disagreed or were short with one another during meetings, we always made an effort to call the person we disagreed with outside of class and resolve our differences.”

The team worked hard to be open-minded and respectful, she said, and it resulted in a stronger team  and the top project among 117 teams and more than 600 students in the competition. Winning also earned $1,500 for the team, and an opportunity to work in an operating room.

“We were lucky to utilize T3 Labs and access a human cadaver for verification testing,” said Nycum, who likes the prospects for her team, and their device.

“With clear communication, we were able to stay safe and collaborate effectively in the hybrid class environment, as well as tackle this problem with full force,” she said. “And our device has strong potential to save lives and improve blood flow to the brain during cardiac arrest.”