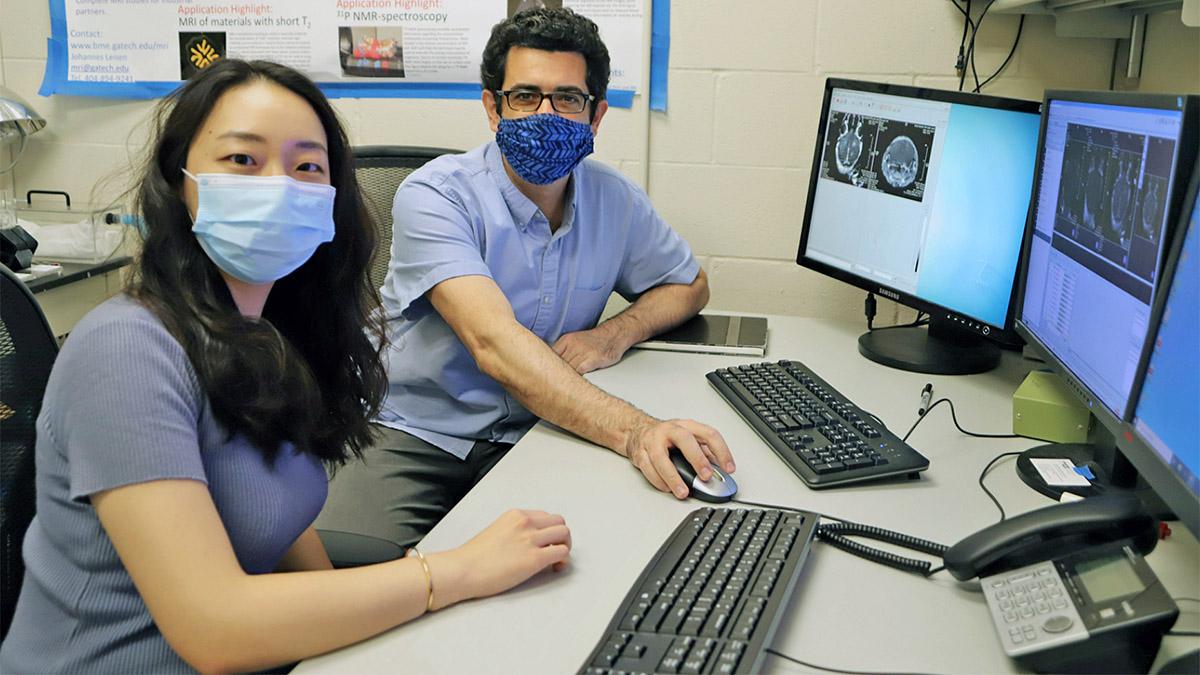 RNA-based drugs have the potential to change the standard of care for many diseases, making personalized medicine a reality. This rapidly expanding class of therapeutics are cost-effective, fairly easy to manufacture, and able to go where no drug has gone before, reaching previously undruggable pathways.

So far, these promising drugs haven’t been very useful in getting through to the well-protected brain to treat tumors or other maladies.

Now a multi-institutional team of researchers, led by Costas Arvanitis at the Georgia Institute of Technology and Emory University, has figured out a way: using ultrasound and RNA-loaded nanoparticles to get through the protective blood-brain barrier and deliver potent medicine to brain tumors.

“We’re able to make this drug more available to the brain and we’re seeing a substantial increase in tumor cell death, which is huge,” said Arvanitis, assistant professor in the Wallace H, Coulter Department of Biomedical Engineering (BME) and Georgia Tech’s George W. Woodruff School of Mechanical Engineering (ME).

Arvanitis, whose collaborators include researchers and clinicians from Emory’s School of Medicine and the University of Cincinnati College of Medicine, is the corresponding author of a new paper published in the journal Science Advances that describes the team’s development of a next-generation, tunable delivery system for RNA-based therapy in brain tumors.

“Our results were very positive, but if you think I’m excited, you haven’t talked to oncologists – they’re 10 times as excited,” Arvanitis said.

The roots of this project go back to when he and the paper’s lead author, ME grad student Yutong Guo, arrived at Georgia Tech in August 2016.

“From the start, I was very interested in the application of ultrasonics in treating brain disease,” said Arvanitis, who linked up with Emory physician Tobey MacDonald, director of the Pediatric Neuro-Oncology Program at the Aflac Cancer and Blood Disorders Center, and one of the paper’s co-authors. “Our main question was, can we use ultrasound to deliver drugs to tumors? Because that is a major challenge.”

RNA drugs have two major weaknesses: limited circulation time and limited uptake by cells. To overcome these challenges, the drugs are packaged in robust nanocarriers, typically 100 nm in size, to improve their bioavailability. Still, these nanocarriers have typically been too large to penetrate the blood-brain barrier, the tightly-connected and selective endothelial cells surrounding blood vessels in the brain, until now a locked door to RNA drugs.

But now, Arvanitis and his colleagues have discovered a safe way to get the drug safely across.

Using mouse models, the team deployed a modified version of ultrasound, the diagnostic imaging technique that uses sound waves to create images of internal body structures, such as tendons, blood vessels, organs and, in the case of pregnant women, babies in utero. The researchers combined this technology with microbubbles — tiny gas pockets in the bloodstream, designed as vascular contrast agents for imaging — which vibrate in response to ultrasound waves, changing the permeability of blood vessels.

“Focusing multiple beams of ultrasound energy onto a cancerous spot caused the microbubbles’ vibrations to actually stretch, pull, or shear the tight junctions of endothelial tissue that make up the blood-brain barrier, creating an opening for drugs to get through,” Guo said.

It’s a technique that biomedical ultrasound researchers have been refining for more than a decade, and recent clinical trials have demonstrated its safety. But there hasn’t been much evidence for selective and effective delivery of nanoparticles and their payloads directly into brain tumor cells. But even when blood borne drugs succeed in penetrating the blood-brain barrier, if they are not taken up by the cancer cell, the job isn’t complete.

Arvanitis and his team packaged siRNA, a drug that can block the expression of genes that drive tumor growth, in lipid-polymer hybrid nanoparticles, and combined that with the focused ultrasound technique in pediatric and adult preclinical brain cancer models. Using single-cell image analysis, they demonstrated a more than 10-fold improvement in delivery of the drug, reducing harmful protein production and increasing tumor cell death in preclinical models of medulloblastoma, the most common malignant brain tumor in children.

“This is completely tunable,” Arvanitis said. “We can fine tune the ultrasound pressure to attain a desired level of vibration and by extension drug delivery. It’s non-invasive, because we are applying sound from outside the brain, and it’s very localized, because we can focus the ultrasound to a very small region of the brain.”