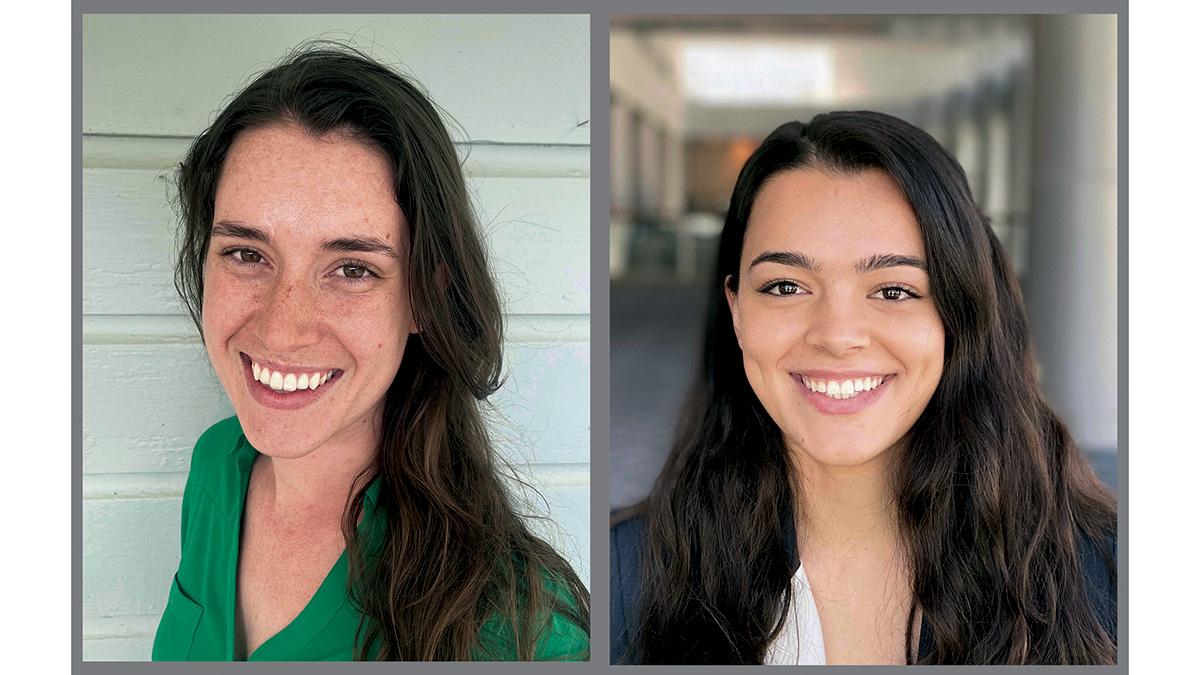 Two women from the Wallace H. Coulter Department of Biomedical Engineering at Georgia Tech and Emory University are among the 28 engineering students receiving Tau Beta Pi Fellowships for the 2021-2022 academic year.

Veronica Montgomery and Elisa Nieves each receive cash stipends of $10,000 as part of the engineering honor society’s newest class of fellows, whose selection is based on academic performance, campus leadership and service, and the promise of future contributions in their fields.

“I was an officer in my Tau Beta Pi chapter as an undergrad, and it was a fabulous experience,” said Montgomery, who studied biological engineering at Massachusetts Institute of Technology before entering Coulter BME in 2016. “It is such a great honor now to receive the fellowship as a grad student.”

Always an analytical thinker with a creative mindset, she entered college intent on making, “a clear and obvious impact on society. That led me to biomedical engineering.”

Her undergraduate research in a large drug delivery lab inspired her to pursue that route as a Ph.D. student. Montgomery – born and raised in Dallas, Texas – admitted the climate difference between Boston and Atlanta played a part in her decision to come to Coulter BME.

“I was excited to move to a warmer state,” she said, adding pragmatically, “but I decided to come to Georgia Tech and Emory because it’s such a great program, with several labs working on drug delivery research. I knew I’d have a lot of great options when joining a lab.”

She joined the lab of Mark Prausnitz who, in addition to being the J. Erskine Love Jr. Professor of Chemical and Biomolecular Engineering, is director of the Center for Drug Design, Development and Delivery – CD4 – at Georgia Tech.

“I was very lucky that Dr. Prausnitz gave me a thesis project perfectly suited to my interests,” said Montgomery, whose research is focused on engineering the skin microbiome for drug delivery. “I have a lot of intellectual freedom to explore the fields that I’m most interested in, and it’s been a great opportunity to prepare for my career.”

With plans to graduate in the summer of 2022, Montgomery is intent on doing similar research in the biotech industry with an emphasis on health care and disease prevention. But she’s also planning to use the community-focused skillsets she developed while at Tech.

“There are a lot of science outreach opportunities here, and participating in that has been significant for me because I have realized how important and fun science communication is,” she said. “Science communication and science outreach have become a major interest of mine, and I’d like to continue working on that in the future, either as a part of my job or as a side interest.”

Outreach also has been one of the key drivers for Nieves, but so has her life experience. She grew up surrounded by medical professionals in Naples, Florida – her parents are a phlebotomist and a physician’s assistant.

“Hearing their stories from work first sparked my interest in the medical field,” said Nieves, who studied biomedical engineering as an undergraduate at the University of Florida. “I love how interdisciplinary this field is. It’s constantly challenging me to learn new material and apply that knowledge for creative solutions.”

While at UF, she had the opportunity to present her research on tissue scaffolds at two national conferences for minority students as well as the Biomedical Engineering Society’s Annual Meeting. She also worked as a trainee in a program designed to support minority students interested in pursuing a Ph.D.

“These experiences were very influential on my decision to apply for graduate school and motivated me to apply for the Georgia Tech Summer Undergraduate Research Experience,” said Nieves, who studied in the Coulter BME lab of Assistant Professor Vahid Serpooshan, work that advanced 3D bioprinting techniques and inspired her to return to Tech for her graduate studies.

But it was Tau Beta Pi’s emphasis on community service that really caught her attention as an undergrad.

“I wanted to inspire the next generation of engineers and become a role model to females and underrepresented minorities interested in STEM careers,” said Nieves, who held several officer posts at the UF chapter, where she coordinated outreach events and facilitated creation of instructional videos aimed to increase the retention rate of first-year engineering students.

But nothing could have prepared her for the past year.

“It’s not how I expected to finish my bachelor’s degree and start my graduate program,” said Nieves, a nod to the challenging circumstances of a global pandemic during a time of critical transition.

“That being said, I am unbelievably grateful for the resilience of my new department and university,” she added. “Georgia Tech has stepped up during a time of crisis and provided an incredible amount of support for its students.”

In her own case, Nieves said that a number of faculty have been staunch advocates, including Coulter BME’s Serpooshan and Manu Platt, and her current principal investigator, Andrés García, executive director of the Petit Institute for Bioengineering and Bioscience. “They’ve helped me achieve several awards and fellowships during my short time at Georgia Tech,” she said.

But sometimes it’s the basic things in the day-to-day work of science that matter most. She remembered a few weeks after joining the García lab.

“I was able to pick up a pipette for the first time in six months,” she said. “And by the end of my first semester, I had a new set of wet lab skills and confidence in my ability to learn from my experiments and make a plan to move forward.”

In addition to Montgomery and Nieves, a third Georgia Tech graduate student – Abraham Atte, Aerospace Engineering – also earned a fellowship from Tau Beta Pi, which has initiated more than 615,000 members since it was founded in 1885 at Lehigh University. The fellowship program has awarded more than 1,736 fellowships and more than $8 million since the program began in 1929.